Two nights ago, I overheard an argument at dinner, between a man and a server. The argument was about whether the server ordered a cup or a bowl of soup. It went on for some time. Eventually, the server burst into tears and the man was asked to leave. All over a cup of soup.

A comparison comes to mind.

Last year I was invited up to Sun River in Oregon to play a few rounds of golf. We rented a large, comfortable, spacious house. We had a great first day of golf. That evening, our host, Jim, told us there was a fire about 50 miles north of Sun River. His brother, wife, and nephew lived in the area.

The next day, Jim received a call. His brother was evacuating the house he’d lived in for 30 years. Jim asked us if they could come to stay with us for a night or two; we of course agreed.

When they arrived, we had a few cocktails and listened to their story. Derek, the son, had awoken to strange noises at around 10 P.M. He saw a wall of flames out his window, 20 yards away from the house. He jumped up, woke up his parents, and fled. Jim’s brother, Mike, quickly realized that their 90-year-old neighbor might not know there was a fire. They raced back up the mountain. Mike busted in her door and was able to get her to safety.

Mike is 82. As I listened, I was blown away by his superman powers. I was amazed at how calm they were. The next day, they learned that they lost everything in the fire: the house, the barn, the land. I was sitting with Mike’s wife when he told her the news. She closed her eyes, for about a minute. Then she opened them and said, “everything will be okay, this is just the path we are on”.

Not once during the next two days did they complain, feel sorry for themselves, act like victims, or get angry. They didn’t snap at anybody.

It makes me think about the argument I overheard at the diner. I was struck by the ease in which that man created an argument with his fellow human, and how little empathy he seemed to have, in a neutral situation. I wonder how he would have reacted if he’d lost his house at eighty-two.

So, next time you find yourself upset at something, take a deep breath. Ask yourself what you hope to achieve by being so upset. What will you accomplish? Is it worth it, to ruin someone else’s day because you didn’t get something you wanted? 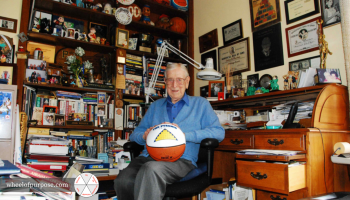 My Lunch with John Wooden

Everybody you meet deserves a connection, and when you truly connect, you will be surprised at what you learn.

Connecting with your purpose in life requires courage because doing so means you are responsible for creating it for yourself.

We Should Never Give Up Hope

We have to hit rock bottom before we can start climbing.

Spin the Wheel.
Find Out What's Next.